Pathology departments play a key role in cancer care, but are currently under enormous pressure and face great challenges. Over the past decade, pathology departments have not only been subject to increasing demands as a result of the growing number of cases, but have needed to adjust to more complex diagnostic procedures driven by the rapid developments in immunohistochemistry, molecular tests and growing expectations from patients. In addition, most countries suffer from a shortage of pathologists, which further increases the gap between capacity and workload and results in long lead times for cancer diagnostics.

Digitizing pathology is a key step in improving cancer care. It is an enabler in meeting the clinical demands of increased efficiency and improved quality of care.

In this article, we outline the department-specific requirements for which pathology will need a digital solution. The article also explains the risks in creating a new departmental silo and shows why it makes sense from both a clinical and economic perspective to make a digital pathology solution part of an enterprise imaging solution.

The current IT situation in pathology

In most pathology departments, the LIS is the main IT system, which often works fine as a separate local system because of the limited number of interactions with other IT systems. The LIS drives the workflow in the lab quite independently of other IT systems. As image review has traditionally been made using physical glass and not digital images, pathology departments have not needed an image management system until very recently.

The experience of image management systems that most labs have is often limited to the scanner and viewer solution that they might have used for low volumes in a pilot or for research purposes. Images in these limited projects have often been handled in separated local storage systems connected to the scanner. They have not been integrated with the central IT infrastructure.

Now that pathology departments are moving from pilot projects and research to full digital workflows for diagnostics, these solutions have proved to be insufficient. The fundamental reason is the size of data processed in pathology. The image files for histopathology average around 0.5-1 GB each (when lossy compressed by the scanner) and a pathology case normally contains about 4-6 glass slides. Hence, an exam contains roughly 5 GB of data.

Keeping these images on local file shares is often not a cost-efficient solution from an IT standpoint. Local scanner storage solutions are not designed to manage the high volumes and high number of users needed or to interface with surrounding IT systems in a standardized and cost-efficient way. These systems also make it almost impossible to integrate imaging from other specialties such as combining imaging from radiology and pathology.

All in all, digitizing pathology makes very high demands on having a well-functioning and well-integrated IT system to handle the images. 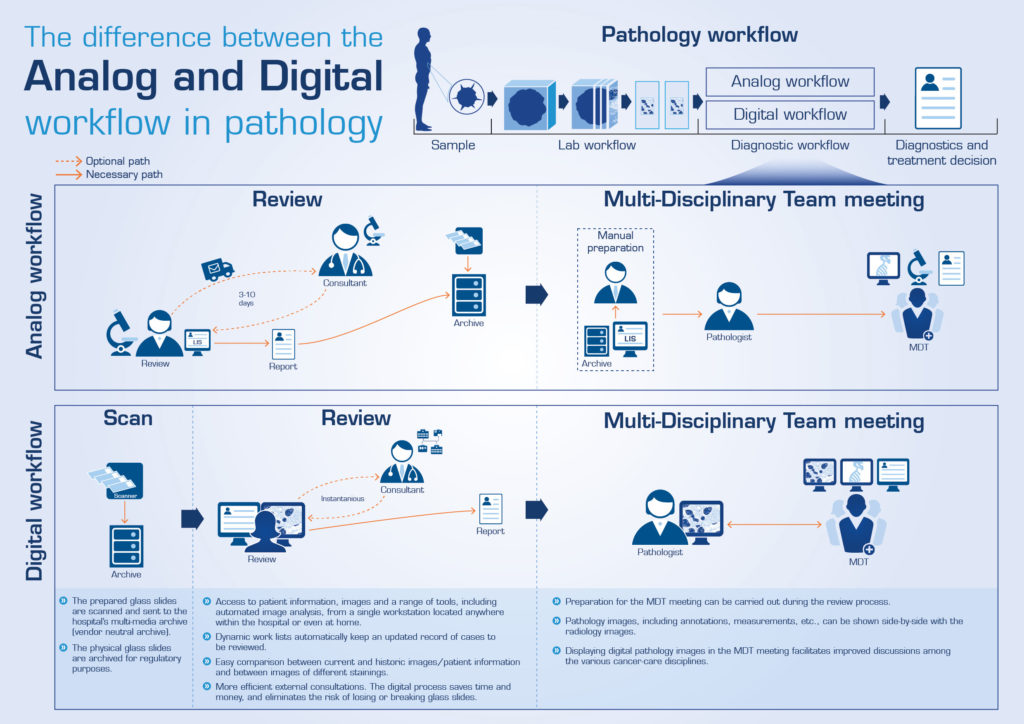 The illustration above illustrates the different steps in the analog and digital workflow. Click on the image for a larger version.

A preferred digital pathology system starts with the digitization of the glass slides made by a modality in the shape of a slide scanner. The image is sent to a central archive together with case ID, staining and block information that is read on the glass barcode. A central workflow engine is distributing the right case to the right pathologist giving pathologists access to images independent of location.

Once the digital image is produced, image analysis processing may be applied to the image to provide findings to the pathologist even before he or she opens the case, thus reducing tedious tasks. This can include, for example, marking of rare events or the tumor area in an image. At the workstation, often referred to by vendors as the “digital cockpit”, the pathologist selects the case from a worklist in either the LIS system or the digital pathology system. Regardless of what system drives the workflow, a desktop synchronization and a backend integration is necessary with the LIS.

The images are reviewed with a viewer and due to their size, they should be streamed from the central server without any need to download the full image to the client. The workstation does not need to be of any high caliber, but more important is the graphic card and using a large enough megapixel monitor. The streaming technology also eases the strain on the hospital network since only 1-2 percent of the total image size needs to be transmitted to the reading pathologist. The pathologist may also be able to perform image analysis on regions of interest which is applied to the image on-the-fly and must be considered when scaling the capacity of the system.

The digital pathology system should also be integrated with the lab’s macro cameras and the radiology PACS to provide orientation of the sampling for the pathologist, and assist if any new surgery is required. It is also common during the review that the pathologist needs to consult a colleague inside or outside the hospital, leading to requirements to be able to give access to the digital pathology system through the firewall remotely and also enable live sharing of the screen.

As the storage will become very expensive for keeping the digital images, the digital pathology system should also be able to provide Image Lifetime Management to compress or remove parts of the images after review, thereby saving on storage costs. For example, the highest magnification layer can be deleted after the image has been reported on.

Most aspects mentioned above describing a successful digital pathology solution will be realized by default if implemented as a part of the already existing Enterprise Imaging System.

One of the major challenges that comes with the huge image size seen in pathology is to meet the need for speed. Pathologists will demand that digital images can be viewed faster or at least as fast as they can with the microscope. Pathologists will not accept any pixilation or lagging at all.

Obviously the solution needs to support pathologists with highly efficient tools and an intuitive user interface, but demands will also be put on hospital IT. Pathologists experiencing a slow viewer will keep pushing IT to speed up the network capabilities, disk, connections, etc., until they have workstations they feel offer the required performance. A prerequisite for expanding the current PACS or VNA with pathology is that the PACS or VNA vendor is able to provide such a high-performing diagnostic cockpit as part of the digital pathology solution.

Utilizing the existing IT infrastructure

The majority of healthcare providers today have an existing PACS or VNA to manage radiology and other images. They have been developed over the past 15 years to fit into the existing IT infrastructure, providing standardized integration possibilities with other IT systems such as the EMR. These systems are also designed to comply with those IT policies that hospitals have today. For example, they are compliant with an acceptable version of the Windows operating systems, browser compatibility and offer a standardized way of interfacing with other IT systems via standard APIs or HL7, etc.

One should not forget that the ancestors of these imaging systems were very much like the local scanning systems we see in some pathology labs today, but as demands on the systems grew they developed to be able to handle the heavy workload and high demands on stability. There is much to save by learning from these previous mistakes and not building another silo.

In recent years, we have also seen most PACS and VNA systems develop to also handle non-DICOM files, such as dermatology and ophthalmology, as well as non-standardized image file formats, such as the proprietary file formats of the different scanner vendors.

Viewers and workflow systems have also been decoupled from the archive, driven by the need for different diagnostic systems utilizing the same archive, resulting in a deconstructed PACS.

Given that the PACS or VNA of the hospital already exists, the most cost-efficient way of implementing digital pathology would be to utilize those instead of implementing a new local solution that would require more integration, separate upgrades and prevent collaboration across departmental borders. Utilizing the existing archive will also bring benefits with economies of scale as the price per additional disk will decrease. Existing hardware for databases and servers could also be shared across the systems.

The clinical benefits of integrated diagnostics

This article has outlined a number of economic benefits of not creating a departmental silo when digitizing pathology. However, there are also clinical benefits.

Treatment errors are tremendously expensive and the topic of integrated diagnostics and inter-pathology-radiology correlation is a hot topic to avoid discordances and increase the quality of diagnosis. I heard from one pathologist today that:

“…probably 5 of the weekly 20 tumor boards could be skipped if the pathologist and radiologist met before the meeting and together, for example, decided that a new biopsy is needed instead of making that decision in front of five other physicians.”

Most providers are convinced that the future will involve a lot more sharing of images and reports across specialties. If digital pathology images are kept in a separate local IT system, this would mean expensive data migrations or integrations between the systems in order to benefit from integrated diagnostics. In a joint system, physicians will be able to access all imaging associated with the patient, both current and historical, without any additional integrations.

Many pathology labs are currently in the process of digitizing their diagnostics, which will require a digital pathology system that can provide cost-efficient storage, high uptime, integrations to other IT systems and a high-performing diagnostic cockpit.

A crucial step for a successful implementation of a digital pathology system is to ensure that the implementation is aligned with the overall hospital IT infrastructure. Making the digital images and associated IT systems part of the overall enterprise imaging strategy, specifically utilizing the radiology PACS and VNA infrastructure, is key. The mistake of implementing new imaging technology as local separated IT systems has been made in many other disciplines before. When the lack of synergies is realized, many healthcare providers face costly migrations in moving to a more central system. Pathology has the opportunity to digitize within existing IT infrastructures from day 1.

In addition, the digital pathology system has to provide pathologists with a high-performing diagnostic cockpit to be accepted by the pathologists. I would like to close this article by quoting a Norwegian pathologist:

“If you are about to add a new guestroom to your house, you would probably not consider constructing it as a separate building. Adding the guest room onto the existing house will save you a lot of money and future work as it will let you use the existing water and electricity systems and avoid going out in the rain when moving an item from the house to the guest room”.