“Why do I need a pathology PACS?” — Revisited three years later

You are here: Home / Resources / “Why do I need a pathology PACS?” — Revisited three years later

Three years ago, I wrote the article “Why do I need a pathology PACS”, which was surprisingly widely discussed among early adopters of digital pathology. The reason I wrote the article was to inform and prevent pathology departments from making the same mistake as many early adopters in radiology made 15–20 years ago when they went digital: the mistake of believing that it’s enough to digitize image review with only a modality/scanner and a viewer software.

Many radiology departments learned the hard way that full digitization requires more than just replacing film with a digital image on a computer screen. As volumes grew, so did the need for a more sophisticated IT system that could offer cost-effective archiving of digital images, integrations with surrounding IT systems and support for managing the full workflow and distribution of digital images. And not least, since their daily work became dependent on the system, there was no room for it to crash. Nowadays, these systems are known as PACS (Picture Archiving & Communication Systems) and are the de facto standard in radiology.

Today, many pathology departments have been smart and learned from radiology to start their digitization by utilizing a PACS from day one — “leapfrogging” the intermediate step of only using a viewer software. This has saved them considerable integration and migration costs and, even more importantly, enabled them to avoid resistance and frustration by implementing a high-performance system from day one. All this is explained in detail in my previous article. 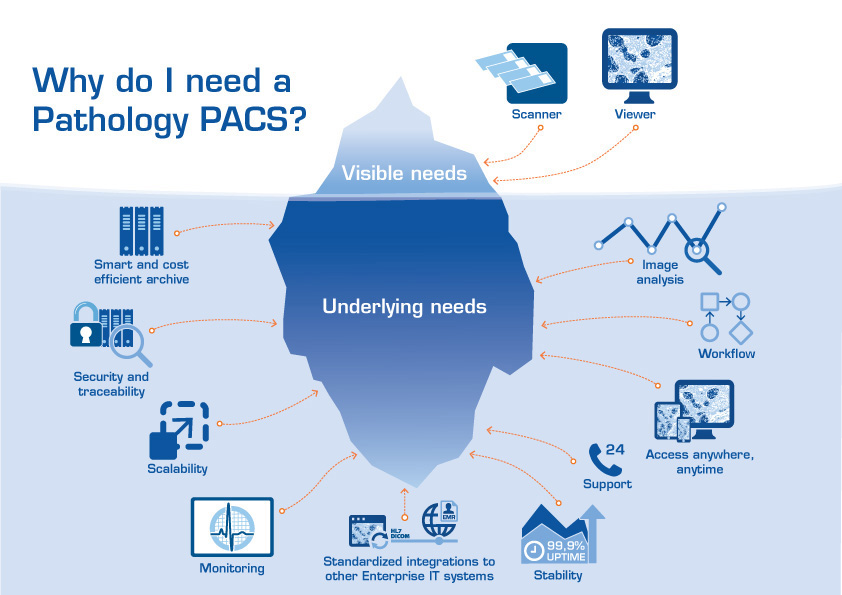 Why is a PACS needed for successful pathology digitization? This illustration summarizes the obvious and underlying needs when digitizing pathology.

Key takeaways from the last three years of digitization in Sweden

Much has happened over the last three years and digital pathology has become a top priority on many pathology departments’ agendas. Sweden and the Netherlands are considered to be in the lead when it comes to adopting digital pathology. In Sweden, for example, all county councils have now acquired pathology scanners, and about a third have purchased a PACS for handling and reviewing digital images.

A few pathology departments are already reviewing a significant amount of their total volumes digitally where using a microscope is now the exception. One example is Sofia Jarkman, a resident at Linköping University Hospital, who is a “native digital pathologist”, meaning that she was taught to review digitally from the beginning.

Worth noting is that none of the pathology departments that have chosen to digitize without a PACS, review a significant volume today—this illustrates the limitations of just using scanners with their accompanying viewing software.

Based on the last three years’ experience, I would like to share my top ten key takeaways with those who are now about to start their digitization of pathology:

Once volumes increase, a scanner and viewer will not be enough. The right image needs to be reviewed by the right pathologist at the right time. A PACS or similar system is needed to orchestrate the workflow and provide the stability needed to avoid crashes. A PACS also complies with current patient privacy and traceability rules, which most viewers don’t.

It’s a matter of changing the way of diagnosing. Digital pathology will require both an organizational (lab) and clinical change (pathologists’ reviews). It’s not just a replacement of technology, which means the project group needs people with experience of change management.

Utilize your radiology PACS or VNA. Leverage previous investments by extending your existing IT infrastructure. This avoids creating another silo and achieves economies of scale. If your radiology PACS can handle digital pathology, evaluate whether its performance is sufficient.

Scanner technology is evolving fast. Make sure the PACS can handle images from several pathology scanners. You don’t want to be locked into one specific scanner brand.

Ask your PACS or scanner vendor for other people to talk to. Learn from your vendor’s other customers to maximize the benefits of your investment. This can save you significant amounts of time, money and frustration.

Engage pathologists, IT and lab technicians from the beginning of the project. It’s important to create a workflow that works for everyone. If possible, involve radiology and learn from them.

Show early benefits. Image analysis, digital sharing, and digital images and reports at multi-disciplinary team meetings, or tumor boards, are some of the key benefits of digital pathology.

Start small and increase adoption gradually. Nothing is perfect from day one. Let pathologists start to review digitally in a slow manner until they feel comfortable. It’s important to have one lead pathologist driving the adoption project to mitigate all resistance. After a few months, stop handing out glass. Instead, let the pathologists go and get them themselves if they still want them, to encourage digital review.

Efficiency gains will not be achieved the first week. Efficiency might decrease in the beginning since it takes time to adjust the lab workflow and for pathologists to learn to review digitally. But starting with a proper PACS will significantly shorten the learning curve to reach a state where the advantages of digital pathology outweigh the time invested.

Pathology labs that have not yet digitized are now in a position where they not only can avoid making the same mistakes that radiology did, but also learn from the first wave of digital pathology adopters. My greatest advice based on recent digitization projects is to start with a proper PACS from day one. The groundwork has now been laid, let’s continue the journey!

This article was originally published on LinkedIn: Why do I need a Pathology PACS? – Revisited three years later

Prepare your enterprise imaging for digital pathology: 6 areas of guidance for a successful solution evaluation