This article is an interview with Sten Thorstenson, senior consultant pathologist at Linköping University Hospital and a pioneer in the field of digital pathology.

I have only had positive experiences. I used to do reviews using the software that came with the scanner, but have seen a major difference since I started using Sectra’s image viewer. 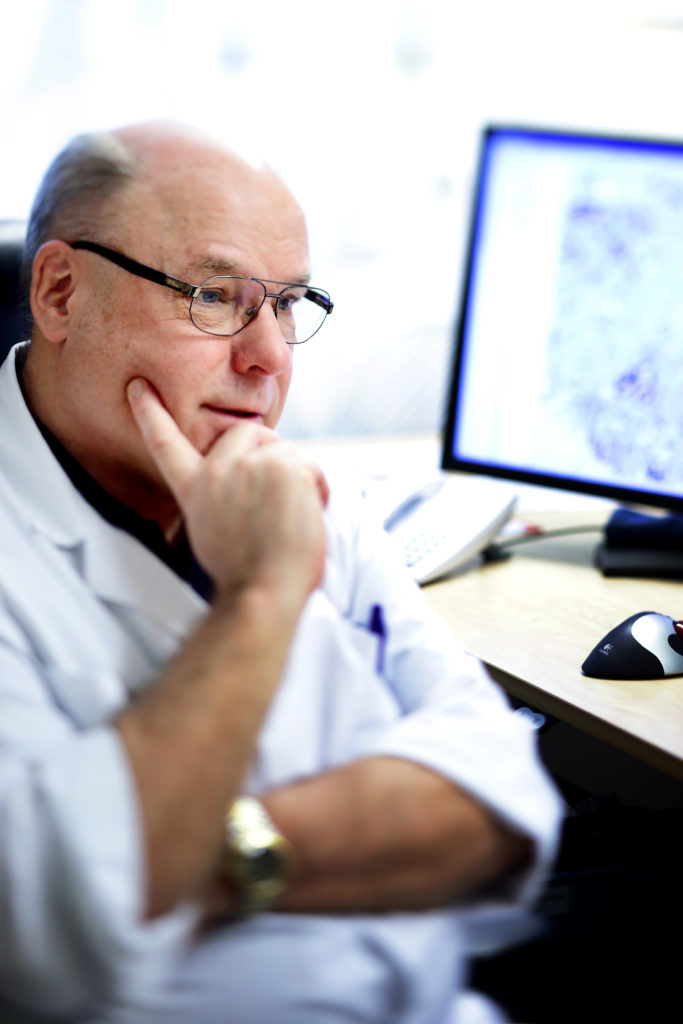 Along with his colleagues in Kalmar, Sweden, Sten began using digital technology to review histopathology samples as early as 2006. However, the full story goes back even further to 1999—in an effort to reduce the amount of time pathologists were spending traveling between Kalmar and Västervik, Sten began using a frozen section scanning procedure for patients undergoing surgery in Västervik and digital telepathology technology to send the images to the reviewing pathologist in Kalmar, eliminating the need to have a pathologist on site. This experience of digital reviews proved valuable in 2008, when Sten and his colleagues became the first in the world to begin implementing digital pathology across the entire department, with parallel access to microscopes and slides. Since January 2014, Dr. Thorstensson has performed his reviews exclusively with digital technology, without using paper referrals or slides and microscopes. Dr. Thorstensson presents primary diagnoses to the pathology department at Linköping University Hospital, but works from home in Kalmar.

What prompted you to begin performing digital reviews in Kalmar in 2006?

The main factor was ergonomics. One of my colleagues started to have problems with his neck—a common problem among pathologists—so we began developing solutions to reduce the amount of time spent at the microscope. One feasible solution was to use the digital telepathology technology we were already using in Västervik for other routine histopathology reviews, which ultimately resulted in a decision to digitize the department.

What do you consider to be the main advantages of digital pathology?

Improved ergonomics is an important advantage, both for the individual pathologist and from a broader socioeconomic perspective.

Another advantage is that the quality of the review becomes more consistent—better reproducibility since image analysis algorithms can be used, for example, for size assessment and cell counting. This results in fewer variations in quality between experienced and less experienced pathologists and enables the individual pathologist to deliver more consistent results.

Earlier samples and referrals are also easier to access, which makes it easier and quicker to compare current and historical samples—something that becomes significant when a patient’s condition needs to be analyzed over time. In general, a digital workflow creates better order in the image archive and reduces the risk of samples being difficult to locate when they are needed because they have been sorted incorrectly or lost.

From a broader perspective, digitization has created entirely new opportunities for cooperation between clinics.
Not least of all, better diagnostics can be achieved through access to sub-specialists. Provided you are using a good, fast image viewer combined with a suitable human interface device, such as a 3Dconnexion mouse, the pathologist can also save time since less time is spent preparing samples—switching slides in the microscope, selecting the right lens, focusing, etc.—in a digital review than when using a conventional microscope. However, I would say that the diagnostic review itself takes roughly the same time regardless of whether you are working on a computer or a microscope.

You have been working on Sectra’s image viewer since April, 2014. What are your experiences so far?

With Sectra’s image viewer, I haven’t experienced any such limitations or unplanned downtime. And I should point out that I am using a beta version. I’m able to get an excellent overview of my cases since I can view all of the slides directly in the review window.

I also have a good relationship with Sectra. I’ve had a valuable dialog with the development team, who have spent a considerable amount of time learning more about the pathology workflow and the challenges involved. It also takes time to explain and answer the questions that come up during this type of work.

Now that the digitization of pathology is taking off, what do you think are the most important factors for a successful implementation?

I think it is important that the department undergoing digitization sees a genuine need for change. In our case, the process began due to ergonomic requirements. In other cases, cooperation may be required between hospitals and regions in order to gain access to pathology expertise. I also think it is important to have an individual driving the change who can “mediate” or “translate,” so to speak, between the tech experts and the medical experts in order to avoid delays to the project as a result of misunderstandings.

It is also vital that a good cooperative relationship is established between the pathology department and the hospital’s IT department—not only during the implementation stage. The IT department must also have the necessary resources once the digital workflow is fully operational. In the past, pathology was not a particularly technology-intensive discipline, so the cost structure for digitization will naturally be different and this is something we need to be prepared for. In my opinion, however, the gains in terms of efficiency outweigh the costs.