Summary of a case study in Region Halland, Sweden, following up on the benefits of Sectra Scheduling, which allows patients to reschedule and cancel their appointments via a web service.

Using Sectra Scheduling significantly reduced the administrative burden for Region Halland. The application allows mammography screening women to change and cancel appointments themselves rather than calling or emailing the healthcare provider. This case study estimated an annual time saving of 4,476 hours, equivalent to three full-time employees.

The purpose of this case study was to investigate whether the benefits have been realized and to estimate how much time has been saved annually.

The Sectra Scheduling application is one of many applications designed by the Sectra Tailored IT Solutions team (described further in this article). This team’s goal is to improve the efficiency of customer workflows by supplementing the main IT systems with smart, tailored applications.

One such application that has been very well received is Sectra Scheduling, a tool that allows patients to reschedule and cancel their own appointments via a web service instead of emailing or calling the healthcare provider.

The application has the following purposes:

The decision to implement Sectra Scheduling in Region Halland came about as a result of efforts to reduce the administrative burden, to engage patients more in their own care, and to reduce the number of patient no-shows. 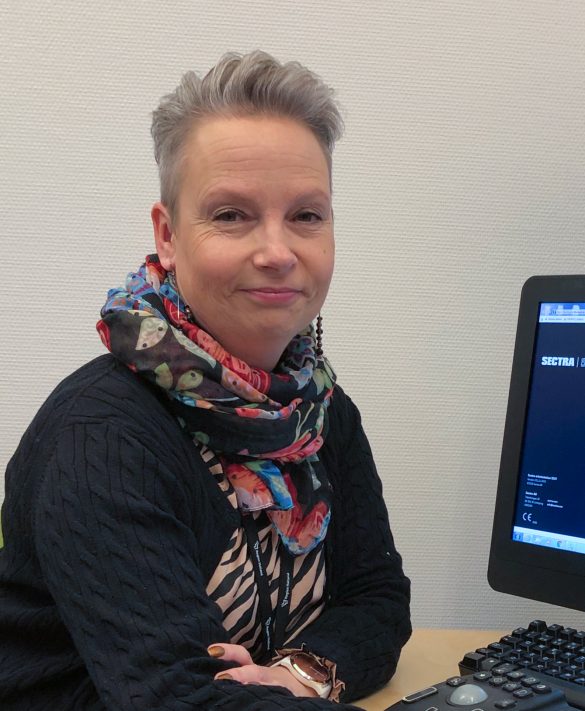 Statistics were collected on the number of bookings and rescheduled/cancelled appointments during a period of two weeks in September 2019. These numbers were assumed to be representative for the entire year. Data was pulled from the Sectra Monitoring Service, which is used to proactively measure performance and create reports for all Sectra systems.

Camilla Larsen, System Coordinator for Region Halland, was interviewed to find out about the time savings and results. The key metrics discussed included how much time was spent interacting with the women and administering the changes to bookings and cancellations without the Sectra application, both over the phone and by email, and how that changed after the solution was implemented. We also asked about the general impression of the secretaries and front desk personnel.

The time savings was estimated based on the numbers received in the interview as well as the statistics from Sectra Monitoring. We also performed a validity check on the numbers by asking for the customer’s own experience of how much time was saved.

Our front desk staff are thrilled since Sectra Scheduling allows patients to do their rescheduling themselves.

Between September 9 and 22, 2019, a total of 7,095 women were called in for a screening. Of this number, 959 appointments were rescheduled and 74 cancellations were made by women themselves via the web (corresponding to 15% of the total number of bookings made). The number of rescheduled and cancelled appointments are visualized in chart 1.

According to the interview with Camilla Larsen, the administration of each email takes approximately ten minutes. Assuming that all the women who rescheduled or cancelled their appointments themselves would instead have sent an email directly to the provider, the total time savings for the two weeks in September was 10,330 minutes [(959 reschedules + 74 cancellations) × 10 minutes]. This equals 172 hours for these two weeks—or 4,476 hours for a whole year, which can be translated into a time saving corresponding to three full-time employees (assuming 1,500 hours per year per employee).

Chart 1: Rescheduled and cancelled appointments made via the web service during the period September 9–22.

To validate this result, we also performed an estimate based on the customer’s own perceived experience of the time savings achieved. For this validation check, Region Halland provided us with a number of 50 to 70 emails received per day (10 minutes per email) prior to the implementation of Sectra Scheduling. The number of phone calls was more than double this figure, totaling approximately 300 to 400 per month (five minutes per call).

In total, the time savings using Sectra Scheduling turned out to be substantial, allowing the provider to spend resources on more valuable tasks. The implementation was also very well received by the secretaries themselves. Camilla Larsen said the front desk staff at Region Halland are thrilled about not having to spend as much time on administrative work.

Research also shows that engaging patients more in their scheduling has significant effects on reducing patient no-shows. For example, a 2009 American College of Physicians study [2] found that letting patients manage their own scheduling led to a far greater likelihood that they would show up for their appointments.

“Out of 11,000 patients, those who were asked for their preferred visit time were far more likely to appear for the appointment.” [3]

In the same study, the author concluded: “We were really, really shocked the first time we went through the data and found out that the maker of the appointment controlled as much as one-third of the probability of whether the patient would show up.”

Another important parameter to take into consideration is the difference in cost savings between screening and clinical patients. In this study, we focused on women called in for screening, where no-shows primarily result in costs for the booked radiology equipment. The situation becomes much more costly for clinical cases where a no-show has a broader negative impact on the entire care process. In general, for these examinations image acquisition takes longer, the examinations are more complex, more radiology nurses are required, and a radiologist has already been assigned for reporting.

Future studies are needed to estimate the cost and time savings when it comes to no-shows. However, this study concluded that a significant amount of time can be saved looking exclusively at the time saved for the front desk personnel in terms of managing calls and emails.